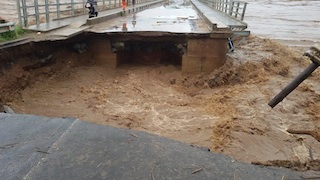 The inhabitants of Mocuba woke up this Monday (12) upset with the waters of the Licungo River overflowing. A wave of more than ten yards flooded and dragged tens of houses, submerged the bridge that connects the Center to the North of Mozambique and took more than two dozens people, including some teenagers. At a time that Mozambique is ungoverned, fired last week by President Armando Guebuza, the Zambezia province went into flood alert.

It was after 4 AM when Licungo River started getting “furious”, it rained for four days and it was predictable that, like all years in this rainy season, the River would shelter more water than usual. However, this time was different: a high wave, it has not been possible to ascertain where it came from, it caught unaware hundreds of residents of the riparian zone and even a group of 25 teens who ended their initiation rites

Seven young people were rescued by the beginning of the night and are back to familiar conviviality. It is assumed that the others are still under siege and can be rescued by emergency crews that work on the ground

A young college student, on vacation at home in the country, told us that his mother received a phone call about half past 4 AM alerting for the ascent of the river that was flooding the bridge on National Highway No.1 which connects Nampevo to Mocuba.

Around 7 AM, the residents saw the River which continued to gain strength and rising as not been seen for several years. “Since 1999 it had not been so much full, is has usually been a normal flood”, told us the young citizen. 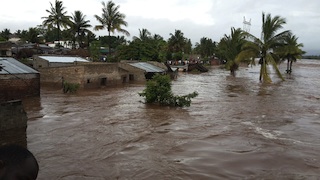 However, in the riparian areas hundreds of substandard housing have been swept away and the more conventional were flooded up to the height of the ceiling. Many residents just might take the clothes and personal items. Various goods purchased over the years lie beneath the waters.

In addition to the residences, several public infrastructures were affected as the drinking water pumping station that was submerged causing the interruption of the provision of supplies of the precious liquid to residents of Mocuba. Electricity also was cut.

“We have no certain information about the level of the waters of the Licungo River, once they flooded our measuring spikes installed on that infrastructure, but the situation is alarming,” said the director of the management unit of the basins of the West (UGBO) of Regional Water Board (ARA) of Central-Northern, Pascoal Alfredo, who added that haven’t been seen the same flood about 40 years in the Licungo basin.

In the mid-morning the bridge over the Licungo River, built before the national independence, began to sag. Its pillars built nine meters deep have been exceeded by the waters and began by opening fissures in a section of the bridge. Road traffic at that time had already been suspended but the popular were crossing on foot.

However, the damage increased and the glimmer of bridge which allowed the passage of pedestrians also ceded. At the moment the central Mozambique is again (like almost all years happens at the peak of the rainy season), separated from the North. Hundreds of passenger cars and buses carrying passengers may not move leaving travelers “besieged” in this region.

Still in Zambézia province, the rain that has fallen in the region and that damaged a metal bridge that existed in the locality of Macuarro conditions the road link between Ile and Gurúè. 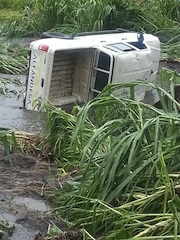 The Rarraga River also overflowed and does not allow the road connection between the administrative post of Mugeba and Mocuba.

In Alto Molócuè the administrative city was separated from the Hall and commercial by Molócuè River that also overflowed and flooded the bridge that allows the connection between the two parts of the city.

On the afternoon of Monday, Carmelita Namashulua, still Minister of State administration and exercising the functions of head of the National Emergency Operating Center (CENOE), made public that the Council of Ministers (it is not known by whom is composed as several Ministers were dismissed last week) in special session declared red alert for areas of Central and northern Mozambique. The Minister also revealed that the coastal regions of the provinces of Cabo Delgado, Nampula, Zambézia and Sofala are under threat from a tropical depression.