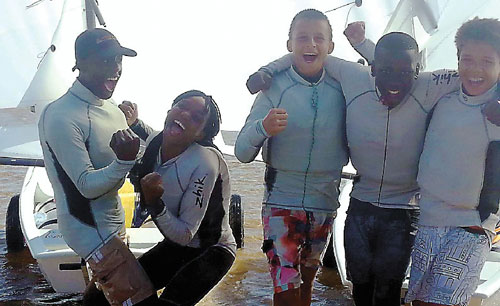 Mozambican sailing team, composed of athletes Adolfo Novela, Neidy Nhaquile, Diogo Sanchez, Jeremias Mazoio and Robin Pefter, were crowned African sailing champions during a competition held in the Moroccan city of Agadir between 10th and 17th of October. These results have boosted Mozambique from second into first place in the African rankings.

In Morocco, Mozambique won three gold medals; one in the team race and the other two for individual male and female races. For the male race 14 year old Diogo Sanchez came in first and earned himself the title of African Champion and Best African Athlete award of the event. Atheletes from other countries such as Denmark, the United States of America, the United Arab Emirates and Oman also participated as guests, but only to prepare their athletes for upcoming competitions.

In the female race, Neidy Nhaquile carried out a three-peat win, following first places finishes in races in South Africa last year and in Tanzania in 2011. Mozambicans Adolfo Novela, Diogo Sanchez, Jeremias Mazoio and Robin Pefter were also at the top of the podium for the team race. They are all members of the Clube Marítimo in Maputo.

According to Hélio da Rosa, General Secretary of the Mozambican Federation of Sailing and Canoeing, the 7 member delegation, five athletes and two coaches, reached the objectives set out for them in North Africa.

“We knew it wouldn’t be easy to triumph in the African Cup, but we worked hard to represent the colors of the Mozambican flag and, thanks to God, we achieved the goals set before this competition. We are African champions for team and individual competition. Our anthem was the most heard in this competition.”

Da Rosa continued to say that, despite being a country that introduced the sport just four years ago, Mozambique already occupies the top position in the African rankings of the International Sailing and Canoeing Federation “Through the results obtained in this tournament, Mozambique moved into first place for African continent rankings. For sure, this is evidence of the hard work being carried out in local clubs, and mainly by the Mozambican Federation of Sailing and Canoeing.”

Although Mozambique took fewer sailors to this competition in comparison to countries such as South Africa, Algeria and Tunisia, the team honored the colors of the national flag. “We made an unprecedented achievement, because we were the country with the second fewest number of athletes. But we have proved that the quantity does not necessarily mean quality. We took first place in all of our events and our sailors Neidy and Diogo were voted as the best athletes of the competition,” da Rosa concluded.

“The secret to this achievement comes from hard work”

According to coach Hugo Sanchez, the three gold medals are the corollary of the work carried out before and during the competition. “These results appear as a consequence of the work that has been put into practice since the first day of preparation.

Despite our lack of training compared to other athletes from Angola, Tunisia and Algeria, who before this competition had trained in Europe, our young sailors behaved like real men,” he said. On the other hand, Sanchez stated that “what is left now is to continue working with our feet firmly set on the ground, in order to repeat these feats in the upcoming competitions.”

The profiles of our African champions 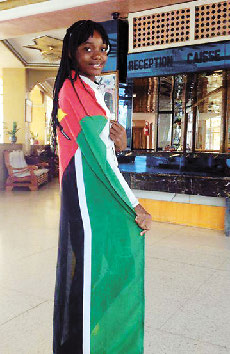 An African sailing champion in the optimist class for the third time, Neidy was born on July 30, 2000, in Maputo. She entered the world of sailing in 2010, when she was 10 years old, invited by the Club Marítimo in Maputo. To be a sailor it is imperative to know how to swim; so, Neidy, before she started sailing, was forced to practice swimming.

After perfecting the skills in the waters she moved on to sailing. In the early days she was afraid of the sea but, at the insistence of Hélio da Rosa, she eventually joined the sport of boating moved by the force of the wind.

Currently she studies in Grade 9 at Triunfo Secondary School in Maputo. She dreams of being world champion, but she is aware that this success will not be achieved overnight, but rather based on hard work and above all, humility. She says that if it wasn’t for her supportive family, especially the father, she would have given up the sport, but he always encouraged her to fight for her dreams. In addition to sailing, Neidy dreams being a model or a TV star.

Diogo began sailing when he was just five years old. He was influenced by his older brother who then practiced the sport. He is 14 years old and was born in Maputo, the country’s capital. Currently he is in Grade 9 at the Portuguese School of Mozambique.

He dreams of being a rich man, but he still doesn’t know what to do to obtain such wealth. When it comes to sailing, he wants to be a world and Olympic champion. Despite not having any international sailing medal on his resume, Diogo considers his brother as his source of inspiration. 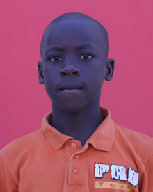 Jeremias helped Mozambique win the gold medal in the team competition. He was born July 13, 2001 and started sailing in 2010 after being invited by Clube Marítimo in Mapito while in primary school.

Currently, he is in Grade 8 at Francisco Manyanga Secondary School. He dreams of studying public administration. As an athlete, he aspires to win a medal in the two most important competitions in the world – at the World Championships and the Olympics.