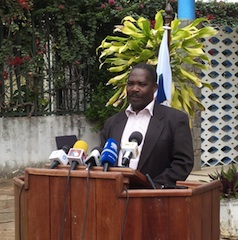 The largest Mozambican opposition party, the Mozambique National Resistance (Renamo) has proposed, in an as yet unanswered letter sent to the government in October, the involvement of South African President Jacob Zuma and the Catholic Church in the political dialogue – which has no fixed date to resume after being suspended about four months ago – between Renamo and the government to resolve the politico-military tension.

“Over a month ago, in October, it sent a letter to the Presidency proposing Jacob Zuma and the Roman Catholic Church as mediators (…) We have been waiting since then for a formal government reply,” said Renamo spokesman Antonio Muchanga explaining that “President Zuma has already successfully mediated the Zimbabwean crisis.”

The Roman Catholic Church has also intervened successful! ly in the meetings between former President Joaquim Chissano and Renamo leader Afonso Dhlakama, leading to the signing of the General Peace Accord, now the cause of the rift between Renamo and the government, together with the non-recognition of the results of the last general election won by the Mozambique Liberation Front (Frelimo) and its presidential candidate Filipe Nyusi, according to the Constitutional Council’s final ruling.

Muchanga said that the national mediators, including Dom Dinis Sengulane, Lourenco do Rosario, and Father Couto should be replaced because they have not done their job of ensuring that the sides achieved peace, supposedly because “they were learners and did not have experience, and the process ended in the shameful state that we all saw.”

Since the political dialogue ceased, there are no known efforts between the sides to obtain permanent peace. Last week, hours after President Nyusi made his State of the Nation speech, Dhlakama prom! ised that “we will not fire a single shot” but he threatened to carry out unimpeded destruction if the Rapid Intervention Unit (UIR) and the Mozambican Armed and Defence Forces (FADM) fired “following Nyusi’s orders (…).”

Last week, Chissano, who signed with Dhlakama the accord that ended 16 years of war, said that Renamo and its leader should “first do everything to merit trust,” indicating that one of the ways to achieve this was to disarm.

“It is not just saying that they will not wage war when they continue to train men and distribute weapons. (…) We have institutions in our country, the state must be acknowledged, there are laws and institutions, but it does not mean that they cannot be changed,” said Chissano.

For his part, former President Armando Guebuza, who signed in September 2014 a second peace accord that is not bearing the desired fruit, said that Renamo’s wish to govern the six provinces where it claims victory cannot be realized. “(Dhlakama) should stop speaking from afar and find solutions to the problems! that he might have (…) It is his habit to say things that in reality are impossible,” therefore “he has been” making promises without obtaining results, said Guebuza.

Reacting to the statements made by the two former presidents, Muchanga said that “it was Chissano who refused to give Renamo’s bodyguards a police status.” He compulsory retired the Renamo general commanders who were in the army. “Guebuza continued this practice as well as ordering the attack on President Dhlakama’s home in Santhundjira.”

At the banquet offered to government members to mark the end of the year, Nyusi also said, before Guebuza and Chissano, that he will continue to avoid intermediaries to try to obtain “direct contact with leaderships involved (in the political dialogue). Sometimes the intermediaries do not faithfully convey the messages issued by the sides due to the importance that they wish to gain in this process.”