Minister Carlos Mesquita, godson of Guebuza and classmate of Nyusi, is violating the Public Honesty Law

Transports and Communications Minister Carlos Alberto Fortes Mesquita is violating the Public Honesty Law for being the titular of activity in five commercial societies that have interests in decisions and businesses within the Communication and Transports Ministry, which he has led since January 19th, 2015. With the silent complicity of the Central Commission of Public Ethics, Carlos Mesquita created one of these societies inclusively (with intentions to, among other activities, explore road, rail, multimodal transport terminals) after securing a place in the Government of Filipe Jacinto Nyusi, his old classmate and colleague.

Known for his background in the sector of rail and port transports, Carlos Mesquita started out in the private sector in 1996 with the business Danimo – S.S. Danish-Mozambique – Service System, Limited, with his brothers Adelino and Joaquim Manuel Fortes Mesquita.

Jornal @Verdade discovered furthermore that in the following year Carlos Mesquita established the Society of Consultancy, Services and Representation, Limited (CONSER), along with his brothers Paulo Jorge and Joaquim, Finnish nationals Risto Martti Kontturi and Seppo Antero Yliraisanen, and even included his sister’s husband, José Kataoo of Nascimento Amaral, in the deal.

In October 1998, Carlos Mesquita became a member of Cornelder de Moçambique Sarl management, a commercial partnership between the Dutch company Cornelder B.V and CFM, and was put in charge of managing the rail-port infrastructures and the examination of the containers and of general cargo in the port of Beira. Undocumented information indicates that the last President of Mozambique, Armando Emílio Guebuza, could also be one of the partners of this company.

Soon after, the exploration of mineral coal in Tete began and was transported to the markets using the precarious railway system of central Mozambique. Large, multi-ton trucks were also used by multinational companies who did not have enough money for the coal to arrive at the port of Beira to then to be exported.

The beginning of the empire

Six years later, Carlos Mesquita created the society Cornelder Quelimane SARL, for the purpose of managing and operating the port of Quelimane. In blissful irony, his nuptial godfather, Armando Emilio Guebuza, won the elections and became President of Mozambique.

@Verdade learned that Cornelder Quelimane, aside from partnership with the Dutch multinational Cornelder and with Railways of Mozambique (CFM), also includes as partners Carlos Mesquita, Rui Fonseca (who at the time of constitution of the society was president of Council of Administration of CFM), Domingo Bainha (who at the company’s establishment was a member of the CFM Administration Council) and even Miguel Matabele.

At the end of 2006, the Mesquita siblings and sister-in-law Célia, created a new company in the transport sector called Danmo Service System, Limited. According to what @Verdade learned, besides the procuring of maintenance garages, equipment repair and rentals for the transport industry and cargo handling, this company also has in its social objective the “exploration of marine, rail, road and multimodal transport terminals, for national, international and of transit purposes” and furthermore the “assessment of dry ports.” 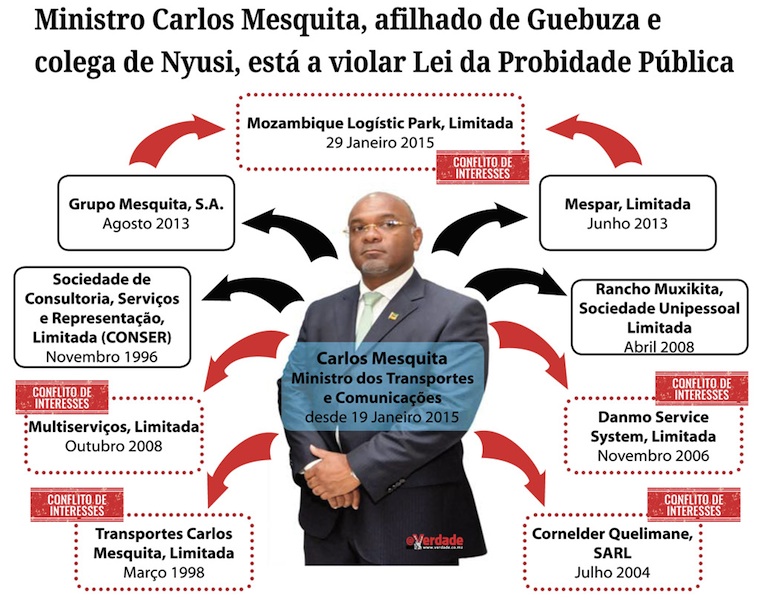 “The exercise of the activity of road, marine and aerial transport of cargo and of passengers on national and international routes; The exploration of maintenance and cargo handling garages; The exploration of vehicle parking lots; Commercialization of pieces and accessories for vehicles and equipment; The exploration of marine, rail, road and multimodal terminals for national, international and of transit purposes; The exploration of dry ports […]; Instalment of storage services, processing of cargo and of logistics; Instalment of specialized services for operation of handling equipment for port cargo on land and on board ships; Selling or renting of specialized equipment for port, rail, road and airports activities; Services rendered for specialized technical support as regards to port, rail and road management and operation; Practice of export activity and import of goods and general trade; Practice of industrial activity in the alimentary, metal mechanics and lumber sectors; The exploration of agriculture units; Practice of hotel, furniture store and tourist activity; The exploration of mining extraction and processing units; Representation of domiciled commercial or other societies in the territory of the Republic of Mozambique; Representation and commercialization of national and international brands; Construction and maintenance of roadways, railways and bridges”, and also the instalment of any other service related directly or indirectly with its social objective.

In April 2008, Carlos Mesquita extended his business portfolio to include “promotion and development of agriculture activities, processing, distribution and commercialization of agriculture products”, with the establishment of the single entity company Rancho Muxikita, Society Limited Unipessoal.

In August 2008, the Mesquita sibings and their brother-in-law created a new transport company: Multiservice, Limited. In line with the investigations of @Verdade, the social objective of this new company is similar in almost every way to Danmo Service System, Limited, an entity created by the same partners.

Although it has not been possible to prove, there are strong indications that these companies, with social objectives aimed at the supply of services in the marine and rail transports sector, were created as a way to supply services to the only company that runs the rail-port system in Mozambique: the Railways of Mozambique, which began to transfer the administration of the ports to private companies since the 90s.

Carlos Mesquita is the framework of Railway of Mozambique. Over many years he held many positions including director of CFM in Beira, then passing to the administration of Mozambique Sarl’s Cornelder in which carried out responsibilities of director, president of Administration Council and delegate administrator. His brother Adelino Mesquita is also a senior employee of the rail-port company where, among other tasks, he acted as administrator. Both exercised high leadership and decision-making positions in CFM, while in parallel they maintained interests in private companies which objectives are to supply goods and rail-port services. With the exit of Carlos Mesquita of Mozambique Sarl’s Cornelder for the Government, his brother Adelino Mesquita took his place.

@Verdade found that in the year 2013, Carlos Mesquita established two more societies with his siblings Joaquim, Adelino, Paulo Jorge, Celso, Célia and his brother-in-law José Amaral. In March they created Mespar, Limited to, among other activities, generate financial contributions and, in August, they created the Grupo Mesquita, S.A. also for the administration of financial contributions and administration of companies, among other activities.

Godson of Guebuza and colleague of Nyusi

However, when his godfather, Armando Guebuza’s last mandate ended, it was a happy coincidence that Carlos Mesquita’s former classmate, Filipe Jacinto Nyusi, ascended to power in Mozambique They first studied together at Escola Samora Machel (Samora Machel School) in Beira city in 1981. Later they taught classes in the Technical School, now the Industrial and Commercial School of Beira. They studied together at the Universidade Eduardo Mondlane (UEM) and they worked together in Railways of Mozambique.

Now Carlos Mesquita and Filipe Nyusi work again together in the Mozambique Government.

With headquarters in the city of the Beira, in the avenue Base N´Tcinga, no. 2575, Munhava Industrial area, @Verdade found that this company’s main objective is “the exploration of cargo road, railway and multimodal terminals of national and international transit purposes, the exploration of dry ports […], exploration of transit customs warehouses, the supply of rental equipment for the transport industry and cargo handling.”

For several weeks @Verdade sought, unsuccessfully, to get a comment from Carlos Mesquita, particularly on if the minister is aware that, as public employee, his involvement in private entities directly relating to his work as minister is conflict of interest, according to articles 37 and 39 of the Public Honesty Law.

The conflict of interest “exists due to relationships when the public servant has to make decisions, to practice an act or to celebrate a contract in that he has financial interest or of any other nature: c) any relative to the second degree of the collateral line”, number 1 of article 37.

“For effects of the present Law he is considered susceptible to patrimonial relationships existing to create conflict of interests when the public servant: the) is titular or other peoples’ representative in social participations or actions in any society commercial, civil or cooperative, that he has interest in a decision, business or any type of relationship of patrimonial nature, with the entity the one that belongs and that he has interest in the decision to take”, article 39.

Ethics Commission does not apply the Law

It was not possible also to obtain a comment from the Commission of Public Ethics, created exclusively to enact the Law 16/2012 of August 14 with the objective of assuring the morality, the transparency, the impartiality and the public honesty for the Assembly of the Republic. The public relations officer acknowledged that the president of the Commission received @Verdade’s request, but was not available to answer to our questions.

@Verdade looked to discover what, if any, work was accomplished by this Commission composed of nine members – Evaristo Mário, Adriano Silvestre, Elsa Alfaia, Rafael Sebastião, David Sibambo, Sinai Nhatitima, Carlos Machill, Jamisse Taimo and André Magibire – that is in function since January 24, 2013 and whose mandate finishes this year.

We found nothing substantial. When there are at least two ministers with a conflict of interests, except for what was presented in the meeting with President Nyusi, the Commission does an “analysis and reflection of some received accusations, implementation of sensitization campaigns and the expansion of the structure at the local level and of the sector’s activity” and also accompanies the process of the declaration of goods on the part of the title-holders of the organs of State and of sovereignty as well as of the judicial magistrates and of the Public Prosecution.

The Law of the Public Honesty does not foresee any clear penalization for public employees in conflict of interests. It just says what they should not do while exercising of their functions as public employees. “The sanction that exists is that who is in conflict should be forced to be conformed to the Law (…) otherwise they enter in disobedience”, Baltazar Fael, of the Centre of Public Integrity, explained.

In his inaugural speech, President Nyusi promised a “firm Government in the defence of the public interest” and that he would assure that the state and public institutions acted as “the mirror of the integrity and transparency in the administration of the public, in way to inspire wider trust in the citizen”. Also in violation of the Public Honesty Law, is Land, Environment and Rural Development Minister Celso Correia. There are two ministers in clear a conflict of interests and the passiveness, not only of the Chief of the State, but as well as of the institutions that are supposed to assure the implementation of the Law is worrying.

Even more worrying is when we looked at the Five Year Plan of the Government of Nyusi and we noticed that there are some strategic objectives that are potential business deals for the Mesquita clan: to rehabilitate, to expand and to build ports in Nacala-Porto, Pemba and Macuse; to begin the construction of the railway from Tete-Macuse; to rehabilitate the railway of Cuamba – Lichinga, Machipanda and Ressano Garcia.

Therefore, Minister Carlos Mesquita should resign or the highest Magistrate of the Nation, and employee of the Mozambican people should enact the Law to dismiss him.