Government to pay 2.7 of the 26.7 billion meticais owed to the private sector to stimulate the economy 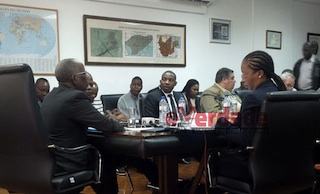 The government has announced that it is to start paying off the money it owes for goods and services provided by the Mozambican private sector over more than 10 years.

By December, 553 small and medium-sized enterprises will receive about 2.8 billion meticais. “We are in a situation in which economic recovery has to follow the path of supply more,” the minister of Economy and Finance said. He did not indicate when the remaining 23.5 billion meticais would be paid.

At the beginning of two important electoral cycles, the government has finally managed to complete the clearance of the expenses for goods and services accumulated between 2007 and 2016, a sum of 29.7 billion meticais which includes 3.7 billion meticais owing to the petrol stations and sanctioned through a loan taken out with a national banking syndicate.

A large part of the state’s debt is with private companies based in Maputo. The most indebted sector is public works, with 59% of the amount accrued, followed by the ministry of Health and Ministry of Gender, Child and Social Action. Together, the two of which account for 16% of late invoices.

After a survey process lasting almost a year and a verification and validation process carried out by the General Inspectorate of Finance which has not ended, the state’s debts for 2017 still have not yet been cleared.

“When we conducted the survey we did not have the full picture. At first glance it was the two previous years, but we came to the conclusion that in fact there were some debts already due for a long time and therefore the General Inspectorate of Finances had to perform a validation, because we could not solve one problem by creating another legal one,” Minister of Economy and Finance Adriano Maleiane explained at a meeting with the Confederation of Economic Associations (CTA).

The governor explained that the previous legislation on Procurement of Public Works, Supply of Goods and Provision of Services to the State, “had some implementation problems in practice, and we have tried to eliminate them. Firstly, we will not open a tender process without budgetary allocation, so if we all comply, there can be no arrears”.

“We had noticed that in Decree 15/2010 there was always a tendency to open a tender and then, for various reasons, the contests were simply cancelled due to lack of money. And the reading we had at the time is that this form of cancelling had some collateral problems, and could even lead to corruption issues,” the minister explained.

Regarding the present as the moment to start payments, with pressure in the electoral cycle and the private sector one of the main contributors to Frelimo, the Minister of Economy and Finance declared: “We are in a situation where there is no way to go further along the supply path, because we are in no position to give subsidies or unemployment benefits, so we have to stimulate production so that companies can resume and revive the economy.”

“All those who are owed up to 60 million (meticais), we will pay immediately. Up to 60 million includes a significant number of companies, mostly small and medium enterprises, and, as we said, this process is also meant to stimulate the recovery of the economy because small and medium-sized businesses today, for reasons we all know, have some difficulties accessing credit and the way we can leverage them is in fact to pay what is due. Only in this way can companies that were on the verge of closing guarantee employment. In turn, the employees will pay tax and the state will have revenue to allow it to work later,” Maleiane said.

32 companies, to which the state owes more than 8 billion meticais, will receive only 10%

“Each company will receive a letter informing it that it has this certain amount due, and that it is necessary to supply its banking info so as to process [the payment] in the shortest time possible. Everyone else will also get a letter explaining what’s going to happen,” the Minister of Economy and Finance said.

Thirty two of the companies, to which the state owes more than 8 billion meticais, will only receive 10% of that amount now. The payment of the remainder will be negotiated for payment through the bundling of these debts as treasury bonds. “As for the 90% of the 10.4 (billion meticais), we will negotiate the time through the Treasury, whether they will be paid over five or ten years. It will be an issue of treasury bonds but will also be listed on the stock exchange, and this is very important for the businessperson, “said Adriano Maleiane.

A Verdade however has found that the state is suggesting paying less than half its global debt of 26.7 billion meticais, since the General Inspectorate of Finance has only validated 10,418,291,185.94 meticais of that amount.

The remainder is still in the process of validation because issues were detected such as the absence of contracts, the lack of a compulsory Administrative Court permit and still others allegedly contracted but whose processes were not duly constituted under the terms of the Contracting Legislation Public Works Contracts, Supply of Goods and Provision of Services to the State.

Regarding these services and goods illegally contracted, the president of CTA, Agostinho Vuma, called on the government “not to transform the process of debt clearance into a process from which criminal problems may arise”.