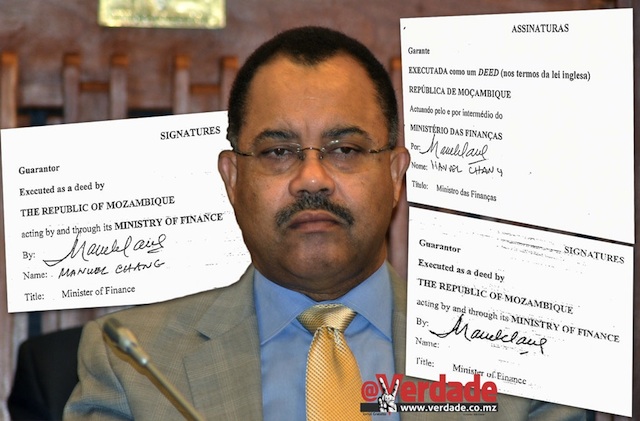 The independent Mozambican website “A Verdade” has confirmed that the person who signed the government guarantees for over two billion US dollars worth of loans for the quasi public companies EMATUM (Mozambique Tuna Company), Proindicus and MAM (Mozambique Asset Management) in 2013 and 2014 was the then Finance Minister, Manuel Chang.

“A Verdade” has obtained copies of three of these guarantees, and, as long suspected, they bear Chang’s signature. Two of them date from 28 February and 30 August 2013, and guarantee loans granted by Credit Suisse, through its London branch. The third, dated 20 May 2014, guarantees a loan from the Russian bank VTB.

The loan for EMATUM was 850 million US dollars, for Proindicus 622 million and for MAM 535 million.

One of the clauses in these guarantees states that “the guarantor (i.e.the Mozambican government) is complying in all aspects with its obligations to the IMF and the World Bank”.

The IMF regards it as a basic duty of its member countries to keep it fully informed of their true macro-economic situation, but it was only in April 2016, through press reports, that the Proindicus and MAM loans became public knowledge (the EMATUM loan was not hidden, since it involved the public issuing of bonds in Europe).

The IMF reacted by suspending its programme with Mozambique, including the second instalment of a 283 million dollar loan from the Fund’s Standby Credit Facility (SCF).

As for authorization, the Mozambican parliament, the Assembly of the Republic, certainly did not authorise Chang to sign the guarantees. Most members of the Assembly were unaware of Proindicus and MAM until this year. The Bank of Mozambique was also kept in the dark – in May, the then governor of the central bank, Ernesto Gove, declared that he had never heard of Proindicus.

The Assembly has set up a Commission of Inquiry which is looking into the loans and guarantees. Chang is due to appear before this Commission on Tuesday, and doubtless it will ask who authorized him to sign the guarantees. These hearings are being held behind closed doors.

The Attorney-General’s Office (PGR) is also investigating, and has questioned Chang. In July, the spokesperson for the PGR, Taibo Mucobora, announced publicly that the investigators had found “violation of budgetary legality concerning failure to respect the limits for guarantees and failure to observe legal procedures”.

This, Mucobora said, means that the crime of abuse of office, or abuse of position, had been committed.